The American Academy of Developmental Medicine and Dentistry (AADMD) condemns the practice of Infant Oral Mutilation and calls for its eradication across the globe.

"For thousands of years, people have practiced the mutilation of the human body for superstitious, cultural, esthetic or other perceived reasons—ranging from ritual finger amputation by Papuan tribes in New Guinea to cranial deformation and scarification. The brutal practice of female genital mutilation is prevalent in large areas of the world. Recently, body piercing and tattooing have become almost mainstream practices in North America.1

And then there is... "Infant oral mutilation (or 'ebinyo' by Bantu-speaking ethnic groups) is a widespread and dangerous traditional practice affecting 25 million children in East Africa. It involves the extractions of unerupted deciduous (child) canine teeth in young infants owing to the corresponding swelling being mistaken as the cause of diarrhea and fever. The rudimentary practice, undertaken by local healers, can sometimes be fatal." 2

The barbaric removal of unerupted deciduous canine teeth related to the normal swelling of the gums being mistaken for 'tooth worms'; is a highly dangerous and sometimes fatal practice. Frequent side effects include blood loss, (hemorrhage) shock, septicemia, tetanus, transmission of blood-borne diseases (such has HIV and AIDS), and even death from primitive unhygienic surgery. Unlike the increasing awareness surrounding female genital mutilation, government and many organizations are entirely unaware of the dangerous implications of IOM. Rudimentary tools are often used to perform IOM; these include bicycle spokes, hot nails or needles, pointed knives, razor blades, scissors, rusty wires and other sharp instruments. 2

Traditional village healers, herbalists, priests, and also midwives typically perform these procedures. Local communities often seek village traditional healers in times of illness. Village healers have financial incentives for undertaking IOM and, therefore, vast pressure is placed upon vulnerable parents to pay for treatment for their infants. When tooth buds are extracted, they exhibit a milky appearance, and the village healer shows the parents so that they can see and feel the "tooth worms" supposedly causing the child's illness. 3 "With an infant mortality rate of 133/1,000 births in Tanzania, it is understandable that parents are apprehensive about consequences of diseases and so beliefs such as this become established." 4

SEVERE COMPLICATIONS: The barbaric removal of unerupted deciduous canine teeth related to the normal swelling of the gums being mistaken for "tooth worms" is a highly dangerous and sometimes fatal practice.

"… Tanzania has a total of between 3,000 to 60,000 traditional healers with potential 8,000 people consulting them daily. This implies than even with more modern health facilities being available, the utilization of traditional medicine is sacredly affected." (Emphasis added) 5

Even today, many parents from both rural and urban areas of Africa seek remedy for their sick, fevered child from traditional healers rather than from healthcare professionals and educated dentists. The practice is now reported to have spread to several subSaharan countries that include: Uganda, Chad, Sudan, Ethiopia, Somalia, DR Congo, Kenya, Tanzania, Rwanda, Burkina Faso and Burundi. (See map 1, next page) 6

Environmental factors such as hot arid climate, lack of water and poor hygiene often contribute to the child being vulnerable to disease and the community has poor health knowledge regarding childhood diseases. 7

Additional reasons for this practice include unfavorable doctor and hospital fees, irrational anxiety and a strong feeling of dislike or an aversion towards academic medicine. "More important, however, are firm beliefs and an engrained trust and confidence in ritualistic practices of traditional healing." 5 To the majority of the people, traditional healers are among the most competent authorities they know. This may explain why, despite several efforts condemning the practice (by public addresses by political leaders, heath education messages, and the arrest of traditional healers by police) sporadic epidemics of the practice continue to be reported in different regions. 3 Long term effects of IOM include missing primary lateral incisors, impacted teeth, or severe orthodontic complications.

2. The literature highlights that well-educated people also believe in the practice. 4

3. In a study of traditional healers, 40% had no formal education, whereas 46.6% had only primary school education 6

"Currently, human migration from one part of the world to another is a relatively frequent event. Therefore, subjects with IOM may appear geographically widespread, and hence the phenomenon is of relevance to clinicians all over the world." (Emphasis added) 8

"Representatives of health organizations are attempting to reduce the incidence of IOM through a multipronged approach directed at rural villagers and traditional healers. They are aiming to explain the adverse effects of this practice, provide counseling regarding the use of intensive rehydration in the management of childhood diarrheal illnesses and reduce the incidence of waterborne illnesses by providing clean water. However, until the scourge of childhood illness can be reduced in rural areas of Africa, it is unlikely that these practices will be eradicated." (Emphasis added) 1

In addition, the problem of intentional dental mutilation is compounded in many developing African countries by a lack of belief in Western medical practices and inadequate access to trained dentists. For example, the World Health Organization estimates that in Ethiopia, only 93 dentists serve a population of more than 77 million people. As a result, many parents receive their counseling on dental and medical care from tribal elders or traditional healers. 1

When designing strategies, is education and trying to influence behavior through knowledge the best way to end this form of child abuse? When looking at why a belief may be so 'deep-rooted' we tend to consider reports on how: 1) historical events (wars), 2) social factors (pressure on mothers to find a cure for an ill child) and 3) the significant role that a traditional healer has in a community are recurring realities. "The fact that an illness such as diarrhea is so common suggests that there should be a physical reason. The average child in Sudan will suffer from diarrhea three times a year and is the leading cause of death of children. It should come with no surprise that 90% of mothers place the blame on 'false teeth'. The opportunity for change is increasing in East Africa, particularly following the successful and effective campaign to end female genital mutilation." 4

"Cultural practices around the world continue to challenge the conventional standards of health. Many of these practices act as barriers to reducing childhood mortality and disease. Although, in many cases, concerted attempts to diminish these practices through education are successful, some evidence suggests that practices such as IOM actually may be increasing. Although there is no reason to believe that these practices are occurring in North America, it is reasonable to expect that as more people from developing countries immigrate to the United States and Canada, dentists and allied dental personnel may observe the long-term effects of these practices. Findings that should alert the clinician to a possible history of IOM include the absence of primary canine teeth or lateral incisors and malformed permanent canine teeth" 1

Although the adverse effects associated with the practice of IOM are well-recognized by health care providers in Africa, knowledge about this practice is not widespread among dental professionals in Europe and North America. In many cases, dental practitioners treating refugees from Africa with missing or malformed permanent anterior teeth may assume that these teeth were extracted or damaged as the result of a tribal custom performed on the permanent teeth, and they may overlook the possibility that the observed effects are the result of incidental damage to the tooth follicles following extirpation of the primary canine tooth follicle. Because dental practitioners may encounter patients who have been subjected to these practices, it is important that they be aware of the social factors behind this practice. 1 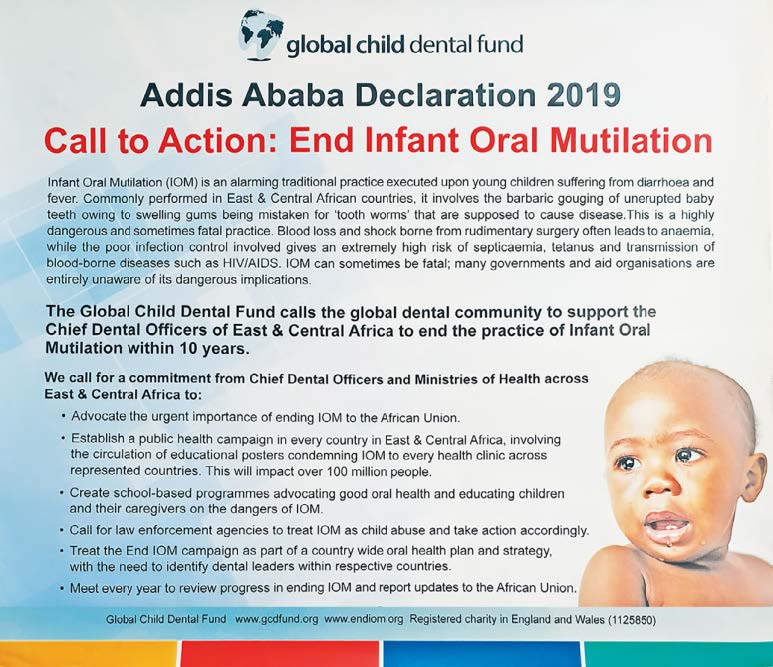 A DECADE OF ACTION: The Global dental community is to support the chief dental officers of east and central Africa to end the practice of infant oral mutilation within 10 years.

The American Academy of Developmental Medicine and Dentistry (AADMD) condemns the practice of Infant Oral Mutilation and calls for its eradication across the globe. The AADMD understands that this is a form of child abuse and that education is needed to explain the irrationality of the practice to tribal leaders, healers and parents, and has offered its support and assistance to dental and public health officials in Kenya as an initial start in the campaign to eradicate the practice.

Is this any different than the need for improved reactions by the general population in our communities with regard to youngsters and the not so young with disabilities? •

The American Academy of Developmental Medicine and Dentistry (AADMD) was organized in 2002 to provide a forum for healthcare professionals who provide clinical care to people with neurodevelopmental disorders and intellectual disabilities (ND/ID). The mission of the organization is to improve the quality and assure the parity of healthcare for individuals with neurodevelopmental disorders and intellectual disabilities throughout the lifespan.