Broden picked out this plant months ago. This was a plant we would not have picked if Mark and I had a choice. Broden must have looked past what he originally saw to see its potential. I wish we could all look at people like Broden saw that tomato plant.

A few months ago, Mark and I took Broden to Lowe's to pick out flowers to plant in front of our house. As new residents of South Carolina, we were eager to figure out which types of flowers would thrive at our home. After grabbing two colorful Luna Hibiscuses and a few other bright pink beauties, Mark told me he was going to see if Broden wanted to pick out a tomato plant. Looking cynical, I nodded my head and told him I would meet both of them at the cash register.

It's common knowledge in our family that I do not have a green thumb and Mark has to remind me every Spring that plants need water to grow. My dear husband tells me to keep that in mind and check if they show signs of an early death.

After a few minutes, we corralled all of our plants and flowers to the front register. The last plant to be scanned was the tomato plant Broden had chosen. As Mark lifted this poor plant out of the cart and handed it to the cashier, I looked at Mark in disbelief. I'll have to admit, the cashier looked puzzled as he scanned it. "Mark, this is the tomato plant you want to purchase?" Mark looked at Broden and said, "This is the plant that Broden chose, so this is what we're going to plant. This is officially Broden's tomato plant." Of course, after the cashier scanned the plant, Mark reminded me that not only do hibiscuses need water to grow, but tomato plants need water as well.

GROWING CONFIDENCE: Broden's tomato plant was getting taller. Soon, there also were yellow blooms and it grew to the point that the pot was starting to tip over. Once I saw green tomatoes, I couldn't contain my excitement.

Once our flowers and Broden's lone tomato plant were nestled in their pots, I knew that I needed to do everything I could to become the savvy gardener I so desperately wanted to be. Yellow sticky notes covered my kitchen counter with the words, "Water plants!" to remind me that if I don't do my job, these poor plants wouldn't have a chance. Moreover, Broden's poor tomato plant would need more TLC than I thought I could ever give. Every morning or evening, I was out front with the water hose.

A few weeks passed and we noticed that Broden's tomato plant was getting taller, so tall that Mark would have to buy a trellis to support it. How on earth did this sickly little plant grow to the point that would require a trellis? Soon, there also were yellow blooms—and it kept growing. It grew to the point that the pot was starting to tip over. At this point, I was getting up every morning just to see what Broden's plant was going to do next. Once I saw green tomatoes, I couldn't contain my excitement. I was calling my parents. I was taking pictures and sending them to Mark at work. How did a plant murderer, such as myself, grow such a luscious tomato plant?

After a while, I became quite impatient. I kept thinking, "Why so many green tomatoes? Why aren't they red yet?" A neighbor of mine who is a master gardener came by one day as I was standing by our tomato plant in confusion. After telling her that there must be something wrong with this plant, she gently touched a few branches and looked at the green tomatoes. She smiled and said, "Give your plant some time. It will be ready when it's time. It's a beautiful plant."

A few days later, I witnessed the first red tomato. I couldn't believe it. Soon after, Broden's plant continued to produce beautiful red tomatoes. This miracle plant has produced so many that I've been able to share our harvest with our neighbors. After watering the plant this morning, I counted over 45 tomatoes on it. Remember, Broden picked out this plant months ago. This was a plant we would not have picked if Mark and I had a choice. Broden must have looked past what he originally saw to see its potential. I wish we could all look at people like Broden saw that tomato plant. "It's not what you look at that matters, it's what you see."– Henry David Thoreau • 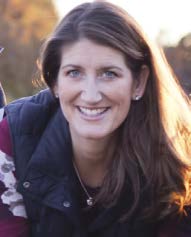 PUZZLES & CAMO Shelly Huhtanen is an Army wife stationed at Fort Benning, GA who has a child with autism. She enjoys sharing her experiences of day-to-day life caring for her son with autism while serving as an Army spouse. She authored "Giving a Voice to the Silent Many" that encompasses many stories of raising a child with autism in the military. Shelly is passionate about autism advocacy for our military and works to bring awareness to our local legislators and command about providing better support for our military autism community, such as better health care and education.