DR. MATT HOLDER RECEIVES THE "MOVE TO INCLUDE" AWARD

Ann Costello, Director of the Golisano Foundation presented the Foundation's 2019 Move to Include Award to Dr. Matthew Holder, an international leader in the care of individuals with Intellectual and Developmental Disabilities (IDD).

The Move to Include award was presented at this year's annual American Academy of Developmental Medicine and Dentistry's (AADMD) One Voice Igniting Change Conference, which was held in Rochester, NY. Since 2015, the award has been given to those who both "believe" and "act" in the purest realm of the essence of "move to include," in the hope that the understanding of "include" can be elevated, promoted, ingrained and demonstrated at the highest levels of human behavior. In presenting the award Costello said, "Matt is a gifted doctor who epitomizes the characteristics of the Award every day in his work, life and professional associations. Throughout his career he has demonstrated that inclusion is never an afterthought or a "do over" effort in social justice. He understands that true inclusion is not something created through a mission statement, a tagline or a bumper sticker."

Dr. Holder began working on what would result in Developmental Medicine becoming a recognized medical expertise soon after starting his career.

In 2002, he took over the American BELIEVE AND ACT: Dr. Matt Holder receives the 2019 Golisano Foundation's Move to Include Award from Ann Costello, Foundation Director. Academy of Developmental Medicine and Dentistry (AADMD). Since then the AADMD has set the curriculum and standards that guide medical students, residents and fellowship-level physicians to better treat and understand patients with IDD. Medical schools and residency programs around the world have implemented curriculum changes based on the work done by Dr. Holder and the AADMD. In 2005 Dr. Holder became Global Medical Advisor for the Special Olympics. He has trained thousands of healthcare providers in addressing the health needs of athletes with IDD. He also assists the American Medical Association and the American Dental Association in developing and passing resolutions that improve the lives and healthof IDD patients. Dr. Holder, alongside colleague Dr. Henry Hood, designed and developed a unique, interdisciplinary patient care and teaching model that meets the health needs of adults with IDD living in the community — the first of its kind in the nation. Today the Lee Specialty Clinic exists as a testament their shared vision. Dr. Holder is a graduate of the University of Louisville School of Medicine. He earned a BA and MBA from the University of Louisville. Learn more about the Golisano Foundation Move to Include Awards by visiting golisanofoundation.org

Fellowships or grants have been awarded to 25 early career epilepsy scientists, the American Epilepsy Society (AES) announced recently. Included are predoctoral and postdoctoral trainees, junior investigators establishing their independent programs, and clinicians and fellows pursuing additional training for a career in research. 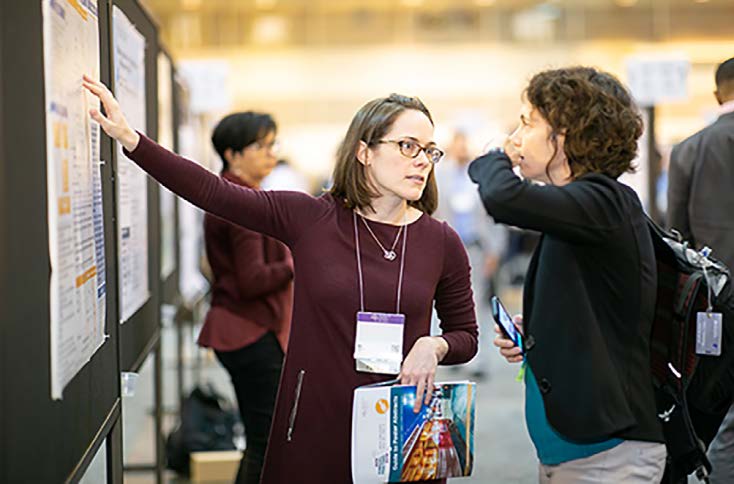 LOOKING AHEAD: AES has an explicit, long-term commitment to developing talented researchers who will advance the understanding and treatment of epilepsy over the next generation.

The scientific and medical communities recognize there is a shortage of researchers focused on epilepsy," said Page Pennell, M.D., president of the American Epilepsy Society. "AES is committed to supporting early career investigators, which in turn will produce new discoveries and treatments in the years to come. Supporting junior investigators is vital given that cutbacks in research funding, particularly by government agencies, have made it extremely difficult for new investigators to secure grants needed to launch a research career and subsequently compete for larger, longer-term support from the National Institutes of Health or other sources."

AES is one of the largest non-governmental funders for those starting their careers in epilepsy research, with over 85 percent of its grant dollars targeted to early career researchers working across the spectrum of epilepsy research from basic science through translational and clinical investigations. The program has nearly doubled in its reach from 14 awardees in 2015 to 25 awardees in 2019. The full list of 2019 awardees is available at: aesnet.org/earlycareer.

AES grants are supported by generous philanthropic donations both from the public and from AES members, with additional support in the past year from LivaNova and Upsher-Smith Laboratories, LLC. Ten awards were made possible, in full or in part, by the support of other non-profit organizations, representing a shared commitment to support the future of epilepsy research. Three awards are supported in full by the Epilepsy Foundation and two by the Epilepsy Study Consortium. The Pediatric Epilepsy Research Foundation cofunded one pediatric research fellowship at 50% and two grants were supported in part by the Wishes for Elliott or the Lennox Gastaut Syndrome Foundation.

The AES is a partner on the Susan Spencer Clinical Research Training Fellowship and congratulates the 2019 recipient, Lisseth Burbano, MD, of the Florey Institute of Neuroscience. The award was established in honor of Susan S. Spencer, MD, a past president of AES, and was created to foster the development of investigators interested in pursuing careers in patient-oriented research. The award is made possible by the American Academy of Neurology with funding from the American Epilepsy Society, the American Brain Foundation, and the Epilepsy Foundation. "It is a pleasure to congratulate this impressive group of talented and committed scientists," said Eileen M. Murray, MM, CAE, executive director of the American Epilepsy Society. "Their work is an important part of our mission of advancing research and education for professionals dedicated to the prevention, treatment and cure of epilepsy."

ABOUT THE AMERICAN EPILEPSY SOCIETY

Founded in 1946, the American Epilepsy Society (AES) is a medical and scientific society whose members are dedicated to advancing research and education for preventing, treating and curing epilepsy. AES is an inclusive global forum where professionals from academia, private practice, not-for-profit, government, and industry can learn, share and grow to eradicate epilepsy and its consequences. For more information, visit AES online at aesnet.org

AFTER CONCUSSION, BIOMARKERS IN THE BLOOD MAY HELP PREDICT RECOVERY TIME

A study of high school and college football players suggests that biomarkers in the blood may have potential use in identifying which players are more likely to need a longer recovery time after concussion.

According to a with so many people sustaining concussions and a sizeable number of them having prolonged symptoms and recovery, any tools we can develop to help determine who would be at greater risk of problems would be very beneficial, so these results are a crucial first step," said Timothy B. Meier, PhD, of the Medical College of Wisconsin in Milwaukee and a member of the American Academy of Neurology, author of the study published in the July 3, 2019, online issue of Neurology, the medical journal of the American Academy of Neurology (AAN), 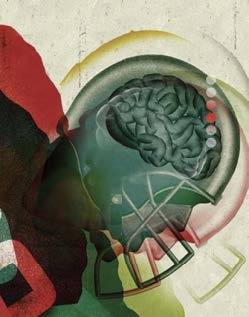 BLOOD, SWEAT AND TEARS: "These results may help us better understand the relationship between injury and inflammation and potentially lead to new treatments."

The study involved 41 high school and college football players who experienced a concussion during the season. None of the players lost consciousness with their concussions. The players were matched with 43 football players of the same level, age and position who did not have a concussion during that season. All of the participants had blood tests at the beginning of the season. Those who had concussions had blood tests within six hours after the injury, then again 24 to 48 hours later and also eight, 15 and 45 days later. Those who did not have concussions had tests at similar times for comparison.

"Eventually, these results may help us better understand the relationship between injury and inflammation and potentially lead to new treatments," Meier said.

Acting on the recommendations of the Federal Commission on School Safety, U.S. Secretary of Education Betsy DeVos recently announced the release of the Parent and Educator Guide to School Climate Resources.

This guide, produced jointly by the Department's Office of Elementary and Secondary Education and Office for Special Education and Rehabilitative Services, provides best practices and includes resources school leaders and teachers can utilize as they work to achieve a positive school climate, lower disciplinary issues and enhance school safety. 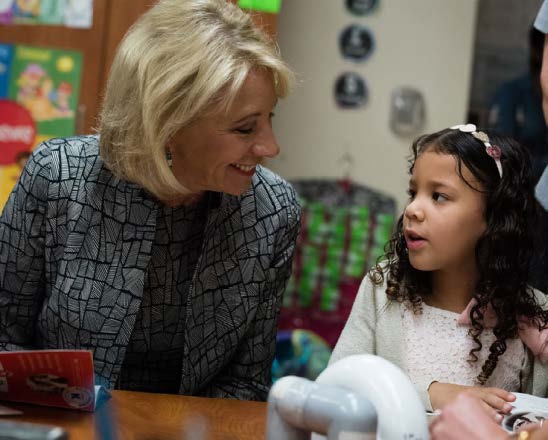 SAFER SPACES: Education Secretary Betsy DeVos visits with a student soon after the release of the Parent and Educator Guide to School Climate Resources.

"We know that fostering a positive school climate is critical to the well-being, safety and long-term success of all students," said Secretary DeVos. "In the absence of a safe and positive learning environment, a student may feel disconnected, disregard consequences, and engage in bullying or other destructive behaviors. As teachers and school leaders assess the unique needs of their school communities, we hope this guide helps them make the decisions that are right for their students and also provides parents and guardians with effective tools to support teachers in making those decisions."

ing those decisions." The Q&A document, which is available on the Department of Education's website, provides parents and educators with useful decision-making frameworks and implementation tools, as well as best practices that school leaders can consider as they work to foster positive and inclusive learning environments. Examples from schools across the country are included to illustrate the various interventions communities are employing to enhance student behavior and achievement. With recent research highlighting the importance of evaluating school climate through a range of indicators, the guide provides diagnostic tools so educators can collect and utilize data to drive their climate improvement strategy.

Additionally, the Parent and Educator Guide to School Climate Resources provides information to teachers and school leaders on how they can receive support from the Department's two technical assistance centers dedicated to promoting safe and supportive schools, including the National Center of Safe and Supportive Learning Environments ( safesupportivelearning.ed.gov), and the Technical Assistance Center on Positive Behavioral Interventions and Sup ports ( pbis.org). The guide includes an appendix of additional resources spanning the work of government agencies and private organizations, equipping parents and educators to create positive learning environments for all students.