A Breath of Fresh Air

The idea that odor might be a key in disease determination is not new. Almost 2,000 years ago, one of the originators of ancient Hindu medicine stated, "by the sense of smell we can recognize the peculiar perspiration of many diseases, which has an important bearing on their identification."

One of my fondes t memories of being a medical student in London was the weekly Liver Rounds conducted by one of our professors at a pub called The Faltering Fullback. I have always been fascinated by the creative names of British pubs and the images they conjured up. Take the Bucket of Blood, The Jolly Taxpayer, Bunch of Carrots, The Cat and Custard Pot, The Hung Drawn and Quartered and, of course, the I Am the Only Running Footman. With names like those, the ales and lagers could almost be an afterthought. Those names were far more impressive than the lame The Swan or The Black Mare.

Some American watering holes were not to be outclassed by the Brits. We have had our own versions of imaginative names for watering holes. There is Psycho Suzi's Motor Lounge and Tiki Garden, Hard Times and Misery, The Fainting Goat, Otto's Shrunken Head and The Fat Angel. One of my favorites, simply based on the name, is Hog's Breath Saloon. One didn't really need to have ever been close enough to a hog to smell its breath to get the picture. The name was a siren when it first opened up in Ft. Walton Beach, Florida in 1976, and it was so successful it led to several locations with the same name. The actor Clint "Make my day" Eastwood owned the one in Carmel, California. The tag line of the saloon was also unforgettable: "Hog's breath is better than no breath at all." 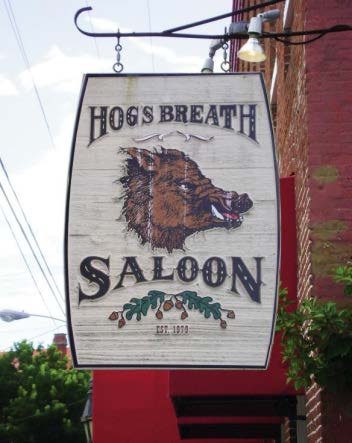 HIGH ON THE HOG: The Hog's Breath Saloon sign and beer coaster.

And, of course, there is some truth to that slogan. No breath equals death, and if the key to life was smelling like a hog, well it's certainly a viable option.

The impact of odors was best described by Patrick Suskind, "Odors have a power of persuasion stronger than that of words, appearances, emotions, or will. The persuasive power of an odor cannot be fended off, it enters into us like breath into our lungs, it fills us up, imbues us totally. There is no remedy for it."

Odors can not only be seductive, they can be diagnostic as well. Kids for instance. Unusual breath odors are common in kids. Take the following list of odor-based diagnostic clues and the related diseases or disorders they might reveal.

Acetone (fruity smell) diabetes or acetone, alcohol, phenol, or salicylate ingestion. Ammonia might be some type of urinary tract infection or kidney failure. Bitter almonds suggest cyanide poisoning. Cat's urine could be, get ready for this one, "beta-methyl-crotonylCoA-carboxylase deficiency," (don't expect the Minute Clinic at your local CVS to make that connection).

Dead fish is a dead ringer for trimethylamine oxidase deficiency, garlic could be arsenic poisoning, horse-like (often described as mouse-like or musty) could be phenylketonuria, rancid butter is likely hypermethionemia and hypertryrsinemia. And of course the diagnostic give-away of the odor of sweaty socks would be reflective of Isovalryl CoA dehydrogenase deficiency.

These tell-tale pediatric disorder-linked odors are reason enough for parents to climb into bed each night to read to their children. They will never suspect that you are really doing a scratch and sniff test. In the not too distant future, the responsibility of smelling your children will not be something that parents will be required to perform.

Thanks to Artificial Intelligence (AI), machines will be able to decipher the chemical compounds in breath samples. According to a recent article in Neuroscience News, "Mathematical models inspired by the brain, called deep learning networks, were specifically engineered to read the traces of compounds left by odors.

A team of physicians, nurses, radiographers and medical physicists from the Edinburgh Cancer Center collected breath samples from participants undergoing cancer treatment." The team analyzed the samples and converted them to data points that would be recognized by accelerated computation techniques. Rather than try to describe the mechanics of "deep learning networks," let's just say that the technology makes the robotic vacuum cleaner look like a pitchfork.

The use of AI will be capable of identifying volatile compounds in breath odors to a set of disorders related to a variety of pathogens and other organic culprits that could suggest disease states, long before the symptoms and deficits announce themselves. The odors would be the equivalent of fingerprints, unique and novel to each disease or pathology. The idea that odor might be a key in disease determination is not new. Almost 2,000 years ago, Sushruta Samhita, one of the originators of ancient Hindu medicine, stated, "by the sense of smell we can recognize the peculiar perspiration of many diseases, which has an important bearing on their identification."

Parents of children with special healthcare needs also have an array of distinguishing odors. From the moment one of them enters the examination room with their child, the astute clinician can tell an "exceptional parent" has crossed the threshold. Odors have historically been described as wispy, rancid, airy, musty, stale, fresh, putrid, faint, light, floral and acrid. None of them describe the fragrance of determination, commitment, strength, focus, perseverance, stamina and resourcefulness.

It's safe to say that the vast array of the characteristic odors needed and displayed by exceptional parents would confuse the most sophisticated attempts of any device fueled by artificial intelligence. The most advanced deep-learning networks would be stymied and derailed by the infinite combinations of odors given off by exceptional parents.

I have no doubt it would result in seeing a bus load of AI engineers, scratching their heads and heading towards the nearest "Hog's Breath Saloon" to start over again. •