My advice to families is to not stop trying. After my frustrating interaction with the EFMP located at our future home, I received another phone call. It was from the School Liaison Office from that same installation.

At Martin Army Hospital, we have started to meet twice a month to discuss ways our EFMP (Exceptional Family Member Program) can support families. The Army has two EFMP's, one office under ACS (Army Community Service) and one office located at the hospital. Each EFMP has a different focus, but they have one thing in common. They exist in order to support Army families who have family members with special needs. Twice a month, we have come together to create relationships and find ways to work together and to be more efficient. As the Army spouse at the table with a special needs child, I work to remind the team of whom we serve. We serve families who have also chosen to serve.

In the last meeting, one of the members of our group asked, "What are your experiences PCS-ing from one installation to another with a special needs child?" I leaned back into the chair contemplating on how to answer his question. I needed my husband's help to answer. Every family is different, but my husband decided that it was in our family's best interest for me to keep a certain level of sanity so he works the EFMP side of the house concerning transition. I focus on researching ABA services and school options. After I left the meeting, I thought I would try to have more of an active role in our next transition. Granted, it's a year out, but I wanted to see what services were available in the area and start to build a relationship with people at the installation where we are moving to next. In our EFMP meeting at the hospital, they call this a "warm transfer." In the end, what families strive for in a PCS move is a warm transfer. I visualize a warm transfer as an invisible hand that guides the family into the installation to let them know that support is waiting for them on the other side.

I was saddened when I attempted to reach out to where we thought we were headed next year. I was told that my family would not be allowed to PCS to their installation. I called someone else because surely the Army would not send us to a place where there were no services for our son. She continued to question if the correct channels had been followed concerning our move. She wanted dates of letters validating the EFMP "nominative process" to prove we were allowed to move there.

Being a spouse, I did not have that information. I began to realize that I would not be able to assist my husband in this process due to the responses I was given, so I handed the torch back over to him. From that point, I admitted to my husband that I was incapable of taking part in the transition at that level. I'm not sure how other families do it, but hats off to them.

In May, the GAO (Government Accounting Office) published a report entitled, "DOD Should Improve Its Oversight of the Exceptional Family Member Program." In a nutshell, EFMP has a lot of work to do. According to the report, the OSN (Office of Special Needs) that was created due to legislation in the NDAA (National Defense Authorization Act) in 2010 has to first establish "common performance measures and assess monitoring activities" for DOD to "fully determine the effects of its efforts to better support families with special needs and the adequacy" of its services. In common layman's terms, we still haven't even figured out a standard of measurement to hold our branches of service accountable. Again, we have a lot of work to do. Until then, families who are enrolled in EFMP will struggle with transitions and may even fight to stay out of the program because they do not see its benefits.

My advice to families is to not stop trying. After my frustrating interaction with the EFMP located at our future home, I received another phone call. It was from the SLO (School Liaison Office) from that same installation. He introduced himself as Gary and seemed very eager to help. After giving him our son's background and why I was calling a year out to start planning for his transition, I could hear him take a deep breath. He asked for my email so we could keep in contact over the year and said, "Ma'am, I've been working in this job for only three months so we are going to learn how to figure this out together." I appreciated his honesty and his willingness to want to help. I could tell from his voice he was sincere and was creating an invisible hand towards me. You could say he was creating a "warm transfer." •

PUZZLES & CAMO Shelley Huhtanen is an Army wife with two children, one with autism, whose husband is currently stationed at Fort Benning, GA. She is an autism advocate and currently the parent liaison for the Academy for Exceptional Learners. 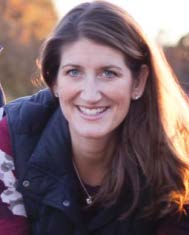 We haven't even figured out a standard of measurement to hold our branches of service accountable. Again, we have a lot of work to do. Until then, families who are enrolled in EFMP will struggle with transitions and may even fight to stay out of the program because they do not see its benefits.

REACHING OUT: "I could hear him take a deep breath. He said, 'Ma'am, we are going to learn how to figure this out together.'"