RAISING A CHILD WITH DYSLEXIA: WHAT EVERY PARENT NEEDS TO KNOW 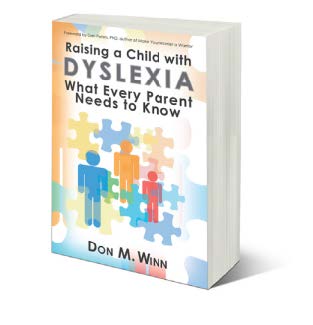 Self-esteem can be a confusing topic these days; everyone has their own ideas on how to build it, how to sustain it, and even how to define it. Popular parenting methods intended to help children develop self-esteem have changed during the last thirty years. These decades have been marked by what I call the "everybody deserves a trophy" movement.

Before this, kids worked hard to develop a skill, whether athletic or academic, and then competed in tests of that skill. The person who did best got first prize, second best got second prize, and third best got third prize.

This is certainly how things work in the adult world: it's how the Olympics work, it's how the Nobel Prize works, it's how first-chair violinists get their position in the spotlight, and it's how contracts in the service industries are awarded. It's even how social media works, to a degree, as consumers weigh in on how they feel about the performance of people who have provided goods or services.

But well-meaning folks somehow came up with the idea that the kids who don't compete or who come in somewhere after third place might feel bad about themselves since they didn't win an award. To forestall this discomfort, many adults instituted the policy that everybody in the class should get a trophy.

This seems like a warm, well-intentioned gesture, but does this model really serve the best interests of a child's emotional and social development? Does creating this expectation of unearned rewards prepare a child to handle the rigors of the adult world when it comes to higher education or the job market?

No. Instead, this model has fostered a generation of young people entering the work force who frequently think they are entitled to be promoted almost immediately, just for showing up, with wages and perks that match those of employees who may have been with the company for decades. This is hardly a realistic expectation, and it sets these young people up for a painful reality check.

The heartbreak here is that these young people truly want to be relevant and to have a positive impact, but they have no idea how such a thing is accomplished. Is it realistic to groom children to expect that they will win every time they embark on a project or endeavor, the first time out of the gate? Is it the kind or loving thing to do? The results speak for themselves.

Did you notice his focus on doing? On action? That's the first clue about the true nature of self-esteem. True self-esteem results from the knowledge that one is doing something well and putting forth one's best effort, not from receiving token acknowledgement regardless of the level of effort expended.

What exactly is self-esteem, and why does it merit special attention in the dyslexic person? Sociologist Morris Rosenberg defines self-esteem as a "favourable or unfavourable attitude toward self." In other words, it is how much a person likes, prizes, approves of, and values himself. Self-esteem is not a fixed commodity but is fluid and changeable. It is very much influenced by brain chemistry, genetics, comparison of the self to others, age, health, beliefs, and social circumstances. What a person is doing and how well he—and perhaps others—think he is doing those actions will either build up or tear down that person's attitude toward himself. Therefore, favorable self-esteem is rooted in an overall sense of competence or being good at things.

Let's take this to the classroom. A child with good self-esteem who gets a failing grade on a pop quiz will recognize that he may have had a bad day, that perhaps he had not given his homework enough attention, or that he was otherwise unprepared. The failure will be viewed realistically as a cau tionary tale, an object lesson, and a temporary setback.

But a child with low self-esteem has a completely different, far more devastating response. He uses this failing grade as concrete evidence that he is stupid, that he can never do better, and that he is doomed to failure. This student feels shame (I am bad) rather than guilt (I performed poorly or made a bad decision that I won't repeat). Despair quickly follows and the student starts to believe that failure is inevitable and wonders why he should bother to try at all.

Shame is destructive and forms the foundation for self-loathing, but guilt can be a positive force because it is instructive. It invites critical thinking, promotes realistic analysis of events, and fortifies a person's resolve to do better next time so as not to experience disappointment again.

The difference between the two children's reactions is that the first child retains his sense of agency, while the second child's agency does not survive the onslaught of his negative emotions. When a person loses agency, his instinctive reaction is to try to avoid all circumstances that might draw attention to his deficits. This is exactly what happens with struggling readers, especially those who are dyslexic!

The dyslexic student takes blow after blow to his self-esteem. One failure after another makes him focus squarely on his weaknesses and harmful comparisons of himself to others who seem to make educational tasks look easy. He gets easily frustrated, even angered, as he sees that his efforts do nothing to create the desired results. He feels worthless, unworthy of love, respect, or hope, and fears that he doesn't deserve his place in the world.

Dyslexia creates a profound sense of self-doubt, because the student fears he can't trust himself to figure things out. He feels unsafe because he is repeatedly told he isn't trying hard enough, and he fears disappointing his parents and teachers, all the while being convinced that he can do no better.

The dyslexic student feels like a fraud, constantly fearing that his inadequacies will be noticed by others. Tragically, when a dyslexic student is stuck in this repeating loop of shame and self-loathing, he is likely to view any successes he may have as a fluke.

Dyslexia—when not understood or accommodated—creates a paradigm of self-limiting beliefs. In turn, those beliefs stymie a child's ability to understand, accept, and embrace his unique situation and find workable coping mechanisms.

Perhaps the ultimate mixed message a dyslexic child receives is that everyone else "gets a trophy," regardless of effort or level of participation, but he is constantly shamed for not trying hard enough!

Morris Rosenberg's book Society and the Adolescent Self-Image includes a test for measuring self-esteem that is still the gold-standard for evaluation today. It contains ten statements to be rated on a scale from one (strongly agree) to four (strongly disagree). Reading these statements offers a glimpse into the possible polarities of high and low self-esteem a child can experience:

We won't get into the nuances of scoring the test, but simply reading through the list of statements illustrates how identifying specific feelings about self can send waves of powerful emotion through the consciousness.

Taking a moment and feeling the weight of the negative beliefs listed in the assessment helps build empathy for the struggling reader or the dyslexic student. Imagine truly believing those negative statements about yourself, being paralyzed by their burden, not having anyone to talk to about your deepest fears, and yet still being called upon to daily enter the arena where you must confront them. Such is the life of the dyslexic who has not yet received support.

The toll it takes on the body is just as devastating as the one it takes on the psyche. Talk to any parent of a dyslexic, and you'll hear stories of lengthy illnesses, poor immunity, lots of viral and bacterial infections, and especially tangible symptoms of anxiety like the ubiquitous tummy ache. Perhaps you have observed these tendencies in your school-age child.

My own childhood was marked by constant stomachaches, intestinal distress, wild fluctuations in appetite, and a general "dis-ease," or lack of ease, in my body and mind. Every time I stayed home, I experienced an onslaught of contrasting feelings—first, relief that I finally had a brief respite from my daily torture, second, anxiety that I would fall even further behind, and third, a tiny hope that maybe when I returned to school this time, I could figure out a way to make things work. But alas, that never proved true. Upon returning to school, my impairments once again asserted their dominance, and I experienced the all-too-familiar feelings of being lost, falling behind, and being trapped in a brain that didn't work.

Low levels of vitamin D do cause negative consequences— stunt- ed growth, soft bones, a bow-legged stance, lower immunity, and a poor mood, to name a few, but usually a person can survive for decades in this impaired condition. Indeed, countless thousands have done so, because discovering the vitamin D need-deprivation was a centuries-long process, and it took even longer to determine how to remedy the deficit.

So it goes with dyslexia. Although it's been on the scientific radar for many decades, most people with dyslexia don't understand it well enough or may not have even been diagnosed, and so they deal with chronic low self-esteem because they rarely feel they do well academically or professionally. •

ABOUT THE AUTHOR: Don M. Winn is an award-winning author, speaker, and dyslexia advocate. As a dyslexic who well knows the challenge of learning to love to read, Don's goal is to write books for children that are so engaging they will entice even the most reluctant or struggling reader. Click here for more on the book: amazon.com/gp/product/1937615561