A Salute to Our Military Service Members

This November, a grateful nation remembers our veterans, military service members, their families, and friends.

"Liberty call!" I heard the announcer yell over the public address system.

Like magic, the declaration dropped a canopy of frenzied joy, setting the newly acclaimed Navy personnel to all directions, almost like long-time prisoners set free. Paulo, my son, rocketed towards me and dropped his solid arms around me as he bawled in a mixture of joy, relief, and anguish, "Mama!"

It was boot camp graduation. Our family drove from South Carolina to Chicago, Illinois to share in the honor awarded to Paulo as a new Navy service member. Before commencement, we hustled among platoons of young men also in their dark blue uniform, still as statues. They faced the commander, waiting for a signal that would readily set them to battle mode. Unable to see, I anxiously waited for someone in our group to identify my son. It took moments before the scrutinizing eyes of my husband finally spotted Paulo. He described how he wore a hardened face, like the rest, and was restrained from any interaction with family and friends – not even eye contact. I felt discomfort over the absence of verbal acknowledgment.

"Have I lost my son to the service?" I fussed. I feared that the process might transform my sweet and playful son into a cold, robotic individual I thought typical of military members of the armed forces. That victorious moment of liberty dispelled all my fears.

Soft-hearted Paulo would not be suited to the military role, I assumed. Born three years after I started my school, he enjoyed a toddler's paradise, which included a slide, seesaw, monkey bars and his favorite, a sandbox. Playing silly tricks on the school children then, and even later in life with his friends, he has maintained a child-like disposition. However, duty called the little man inside of him to be ready to support his visually-impaired mother and sister. From a very young age, Paulo had the mindset to pay serious attention to directions, street signs, minute details for description, and the environment. He would give instructions to cabbies, using his little forefinger to point to streets leading to places we visited. He'd pick up grocery products we needed, sightread labels, tinker with electronic devices, help prepare teaching aids, and watch his baby sister. Like any healthy toddler, Paulo tried running away, keeping quiet as a mouse, and even hiding from me to evade tasks. However, he quickly learned that it wasn't fun to taunt his visually impaired mother. I explained that not making one's presence felt is the cruelest antic to play on one who cannot see. As he matured, Paulo's involvement with the family livelihood likewise increased. He was the "go-to" person for a mother, father, and sister, all with disabilities.

Paulo was attending a technical college while working full-time when, after considerable reflection, he consulted the family about joining the military. A mother relishes the joy afforded her from raising kids, so that a child's declaration of readiness to be independent is both the best and the worst news. Deep inside, I knew that, given his adventurous nature and the thrill he felt when playing war video games, the military could be the right fit for him. But the protective mother in me instantly imagined the daunting situations my baby boy would face in military service. Eventually, I surrendered my fears on the altar of faith. This practice became customary whenever my boy would be deployed. 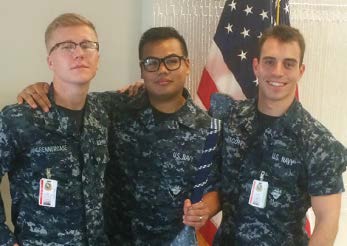 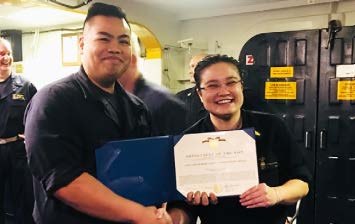 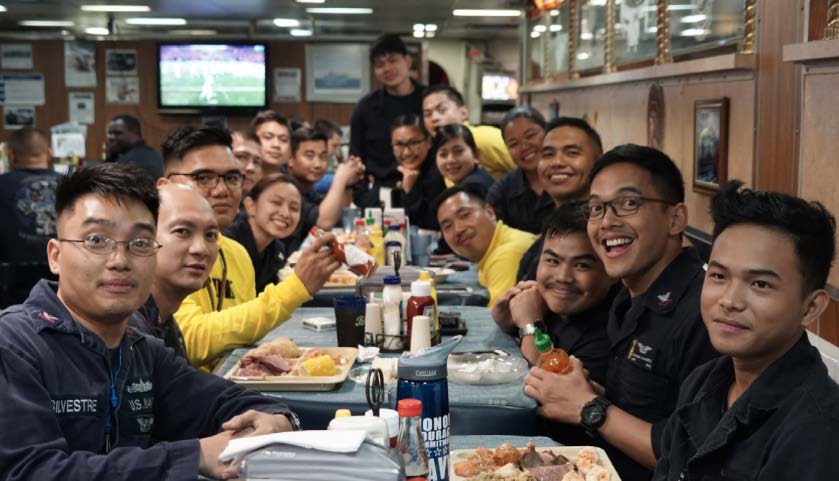 READY FOR DUTY: (Opposite page) The author with son Paulo. "Every military mom and family bears mixed emotions of honor and agony as their kin continue to serve their country in the armed forces. However, they were also ready to serve and, for some, make the ultimate sacrifice." (Above) Paulo among his fellow service members. He is currently a reservist continuing his education to one day serve as a military dentist.

Paulo's ten weeks of physical boot camp was the first time my son, whom I depended on, was away from the family that long. Our correspondence through snail mail increased my anxiety. It threw me back into my pre-technology dark ages when I needed someone to read to me; this time, it was my son's hand-written letters.

In 2017, Paulo was deployed to sea duty, on the USS Wasp, the oldest LHD (a multipurpose amphibious assault ship) in the navy. Hurricane Maria wreaked havoc in South America as they voyaged to Japan. I too experienced category five emotional turbulence knowing that the US Navy always responds to the need for medical rescue and relief operations during disasters and that my son was a corpsman (a medical technician in the civilian world). My life was on hold until news announced that the Wasp played an integral role in supporting the humanitarian rescue and relief efforts in the Virgin Islands, Puerto Rico and Dominica. Listening to Paulo's story about the successful operations of the Wasp, my anguish was instantly replaced with victory and pride. Every military mom and family bears mixed emotions of honor and agony as their kin continue to serve their country in the armed forces.

Currently, Paulo is a reservist continuing his education to one day serve as a military dentist. He undoubtedly enjoyed being a corpsman, and, as he said in jest, "I found my calling in the mouths of my patients."

This November, a grateful nation remembers our veterans, military service members, their families, and friends. But beyond appreciation and respect, our special needs community is spurred to advocate for those who've had the heart to put their well-being on the line as military service members and, while on duty, acquired a disability. When they signed up, they knew precisely how vulnerable they were, opening themselves up to permanent injury and possibly, disability. However, they were also ready to serve and, for some, make the ultimate sacrifice.

Chuck Colson often referred to military service as "an act of love," for love of country and compatriots is the service workers' driving force. As noble as this sounds, people don't realize the daily sacrifices of family members of these men and women serving the country. As a mother with visual impairment who has raised a Navy service member, my story may seem a mere trifle in comparison with that of other families. Their heroic sacrifices remain on the altar of faith, or in the hands of fate, in the belief that someday, they too will be rewarded.

This month let us show our gratitude to our veterans and active personnel, especially those belonging our special needs community. Let us get to know them and listen to their stories. I advise instilling in our children the respect for those in the armed forces. Consider volunteering and even donating to veteran relief organizations that help our silent heroes. And, as you go, please remember their friends and families.• 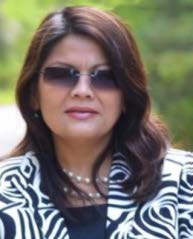 HEARTSIGHT Christina Llanes Mabalot is physically blind from aniridia, but has a vision. She enjoys touching people's lives to bring out the best in them. "Heartsight" explains her ability to see with her heart. Christina earned her B.A. degree and Masters in Education from the University of the Philippines, Diliman, specializing in Early Intervention for the Blind. She later received Educational Leadership training through the Hilton-Perkins International Program in Massachusetts, then worked as consultant for programs for the VI Helen Keller International. She has championed Inclusive Education, Early Intervention, Capability Building and Disability Sensitivity programs. She was twice a winner in the International Speech contests of the Toastmasters International (District 75) and has been a professional inspirational and motivational speaker. Christina is blissfully married to Silver Mabalot, also physically impaired, her partner in advancing noble causes. Their children are Paulo and Jem, who has aniridia. Visit leadershiptovision.com