What little I know about this comes from two weeks in July during the summer of 1974 that changed my life. While looking at Michael, I ventured back to those wondrous 14 days. I was 15 years old and didn’t have a summer job and couldn’t drive and I was immature and I knew it. I’d just successfully negotiated puberty and came out OK but was too much of a young chump to do anything about it. Life selfishly sucked for all of these reasons. I did odd jobs and stuff and bided time. Then I found out that my sister, who was off at Orange Grove Summer Camp, called and told Mom that one of the counselors had had a family issue or something and had to go home. With no hesitation at all, Mom volunteered me to fill in. Yep, I would be there the next day. In 1974 it may have been, “What the blue living hell?!” Today, there would be an “F” word involved.

By the time I’d been drafted to “retarded” summer camp, I’d forgotten about Janie and I was terrified of “those people.” My older sister had been to GG Summer Camp years before as well and she invited Bobby Owens to our house once. He scared the living crap out of me. He was about 6’9” and loud and menacing. I later learned that he was actually none of the above and was much more gut-bustingly hilarious. It was with this mind-set that I sat in the back seat of Dad’s big Pontiac and privately freaked out as he and Mom prattled on about this and that on the way up Highway 27 to Double G Ranch. When I got there, it was late Sunday afternoon and all of the “kids” had already been assigned to their respective cabins and were settling in. Right after Mom and Dad dropped me off at the lodge, it was supper time and somebody rang a bell or something and a mob of gawking, loud, fat, skinny, old and young crazy people came out of the woods and ascended up the lawn toward… me.
Dear God.

There were six or seven cabins on each side of a big slough in the Tennessee River and the cabins on the north shore were for the boys. At breakfast, lunch and supper, each cabin would assemble in a spot out on the lawn before going in to eat. I was to be in Cabin 2. My co-counselors were Bill Harvey, a gregarious 21ish muscled guy from Atlanta who was the cabin boss, and David Dobson. David went to Red Bank and had hair that went all the way down his back. Very much the peacenik, he wore oval John Lennon glasses and he played the electric guitar. Neither Bill nor David needed to introduce me to the campers because most of them vigorously did that themselves. I had no time to be scared anymore because, holy crap, I was mobbed. I met Jackie, Jeff (pronounced jay-yuff), Steven (Eeebbun), Johnny Graaaaayson and several others whose names I’ve sadly forgotten. There were two other Downs guys who didn’t join into the mob thing. They were off to the side and sorta cool. Bill introduced them to me as Mark and Johnny.

Sister Monica had already told me about Mark. I think his last name was Casey. There was also Mark Kelsey (I think) who did shocked Christopher Lloyd better than Christopher Lloyd. The man kept you in stitches. Mark Kelsey was in later cabins and I get their last names confused now. Mark Casey (I think) was a Special Olympics medalist in swimming. He was famous and all of the girl campers swooned but he was cool about it. He didn’t brag or anything 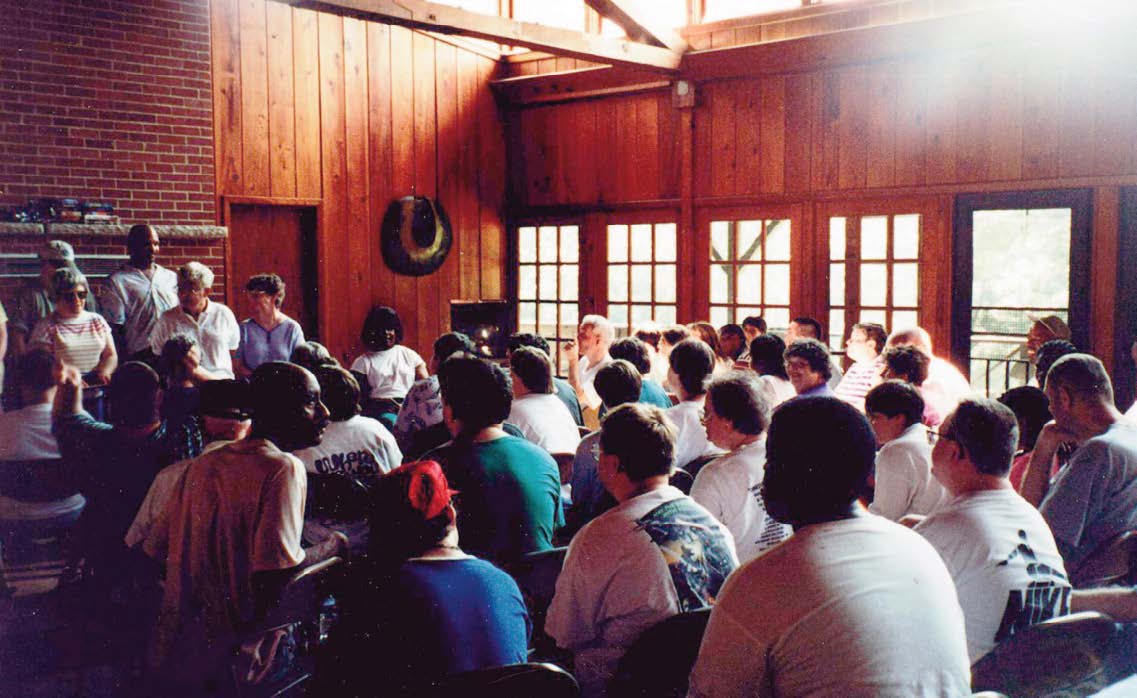