THE ROBOT AS YOUR CHILD'S AVATAR - Page 2

OH, THE PLACES YOU’LL GO: The VGo has given Cris Colaluca the gift of academic and social freedom and the ability to stay involved despite his medical limitations. His hope is that other homebound children can also enjoy the same freedom.

Telepresence robots are being used today by children’s hospitals, various healthcare providers and individuals alike. In this article, I hope to show you how they can provide virtual mobility by allowing your child to go somewhere and move with freedom when he or she may not be able to physically be there in person. The robot is controlled, in real time, by the person whose face is represented on the screen of the remote controlled robot. The robot can be controlled from thousands of miles away. The person controlling the robot can drive it where he or she wants, look at what they want, and collaborate or communicate with whomever they want, offering freedom for the user. This can be truly mobility empowering for the individual using the robot. The robot can serve as your child or youth’s avatar by being their “eyes and ears” in a remote location. There are two scenarios that I’d like to explore that are intended to illuminate how a robot can help your child become “mobility empowered” and look at what you can do in your own home to accommodate it. There are currently a limited number of product line brands of telepresence robots available in the USA. In this article I am namely referencing a model product robot named VGo, pronounced “Vee-Go.” There is another brand device named Giraffe Plus being used in Europe. Its application has heretofore been primarily for the elderly so we won’t explore that model at this time. Since VGo is currently being used in pediatric cases, it makes sense for us to look at this particular model.

It also appears (based on significant research) to be the most developed of these robots.
Scenario 1: A robot has the ability to provide virtual mobility to a bedridden child by delivering his or her presence at a specific location or event. The robot can go to school or to a basketball game for example, when the child is ill or cannot be physically present for any given reason. The rolling robot, delivered to the predetermined location and a 6" LCD screen, becomes the face of your child. In this manner it might be alluded to as his or her virtual avatar.

How to Operate the Robot from Home as an Avatar

• The robot is controlled by a person from a personal computer, laptop or tablet.
• Robot device arrives in a box via mail weighing no more than 30 pounds. • The family installs VGo client app on their computer. It operates with Windows, Mac, iPad or iPhone
• The installed app provides high quality, two way audio and video at the robot.
• The rolling robot is delivered to the predetermined location where the child cannot be in person, but the robot can.
• A 6" LCD screen shows the face of the child, as seen through the camera on his laptop or tablet at home. The robot screen "head" shows the child’s face. • Above the "robots "face" LCD screen is a camera that acts as the child’s “eyes” at the remote location.
• When the user positions their mouse pointer on the screen, driving controls appear. 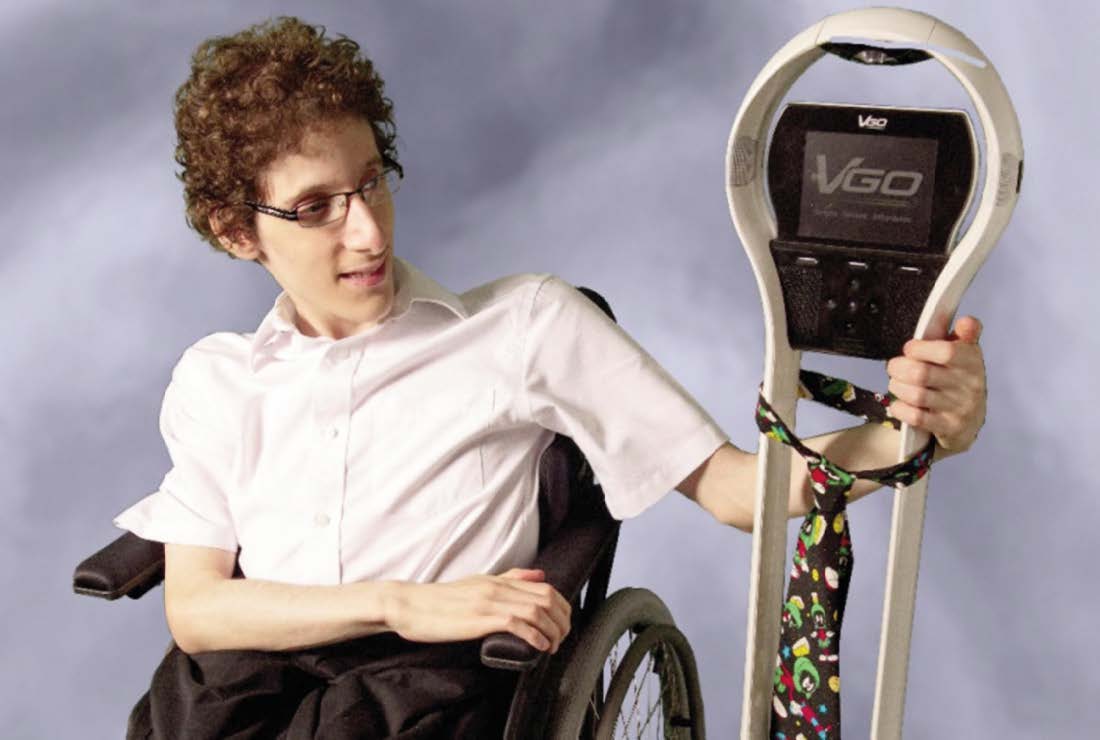